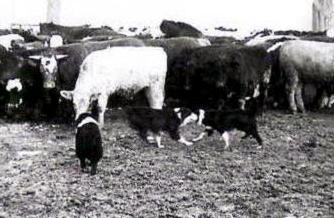 Shininger’s Brandy pedigree has been a subject of interest over the past several years. A walk through the history behind Brandy provides a glimpse into the world of traditional English Shepherd breeding and the contrast between breeding based on performance (stockdogs) vs. breeding based on papers (registration). Most contemporary dog breeders like to believe that the two are one in the same — breed from registered ancestry and you will get dogs that fit the breed standard (standards may emphasize either performance or appearance). Traditional English Shepherd breeders were more pragmatic and realistic — they knew that papers and pedigree were useful tools but that the bottom line was the quality of the dog in front of you: could the dog work, was it the type of dog you aimed to produce? Papers were not a guarantee of performance, and generally of less value than your personal evaluation of the dogs:

“A totally accurate three generation pedigree is an invaluable tool in breeding decisions, if you, as a decision maker, know the traits and prepotency of all the dogs included in that three generation window. Individual dogs beyond four generations are probably not critical to your choice, even if they appear two or more times in the fifth generation or later.

Actually, the potential sire and dam should be close to 99% of your concern in a cross, unless you supervised the actual matings of ancestry behind the proposed mates…take nothing for granted and breed only based on the abilities of the present couple before you.“
(G. Ormiston, New Guide to Breeding Old Fashioned Working Dogs)

Brandy’s sire, Max, was an English Shepherd owned by Mr. Sommers and bred by Carl and Colleen Lechlitner of Wakarusa, IN. Max’s sire (Brandy’s grandsire), King, was an English Shepherd owned by Carl Lechlitner’s father and bred by an Amish farmer named Carl Witmer who lived near Middlebury, IN. King weighed 80 lbs. and worked hogs and cattle; his working style favored gathering (flanking) rather than heeling. Max’s dam was Lechlitner’s Candice, a registered tricolor English Shepherd from south of Wakarusa. She was a heeler and worked the cattle on the Lechlitner Angus Farm. (It is worth noting that traditional breeders of working dogs do not typically keep large kennels — so the likelihood of one individual breeder owning all of a dog’s ancestors is slim.)

Brandy’s dam, Lacey, was also owned by Darlton Sommers. Mr. Shininger saw Lacey work cattle on the Sommers’ farm, liked what he saw, and purchased a pup from her litter. Lacey’s sire, Rags, was an English Shepherd bred by Darlton Sommers and owned by his brother-in-law, Raymond Martin. Rags was predominately black with white paws. Unbeknownst to Mr Shininger, Lacey’s dam, Patches, was imported from New Zealand and registered with one of the Border Collie registries (AIBC), making Lacey 1/2 English Shepherd and 1/2 New Zealand Border Collie. Patches was owned by Raymond Martin; she was an excellent cattle dog, good at the gates and “ran the farm” according to Rex Martin, Raymond Martin’s son. Accordingly, Shininger’s Brandy was 25% New Zealand “Border Collie” by registration. If breed is assigned based on a dog’s type, working style, and the quality of its progeny, however — as is generally the case with working dogs — it is clear that Brandy and his immediate ancestors were genuine “English Shepherds” in every respect! 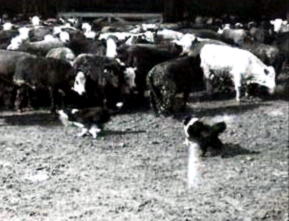 The internet-fueled controversy around Shininger’s Brandy is an illustration of the culture clash between purebreed enthusiasts as molded by clubs & registries, where pedigree is everything, and practical working dog breeders. To one, what matters is “papers” which they claim predict performance; to the other, a dog is evaluated based on the dog’s actual performance, on what you see and what you get from that dog. English Shepherds as a breed have been blessed to have stewards who focused on the latter!

Here is a personal tribute to the Shininger dogs from a cattle & hog farmer in Michigan who got all his dogs (all of which he named Pat!) from the Shiningers: Shininger dogs are “good watch dogs, not hyper, do an excellent job herding, very good companion for children”. (Thank you to Diane Barnard for recording this tribute!)

One day one of the “Pats” from Mr. Shininger flipped a bull that was out of control. The farmer’s daughter who witnessed the scene was afraid the dog would end up being “Flat Pat” but fortunately Pat prevailed! 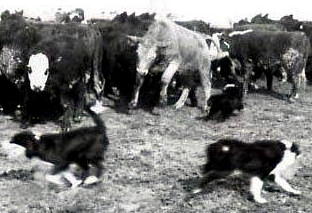