The Powers of the Collie

The Powers of the Collie

“The shepherds’ dogs in the mountainous districts often show the most wonderful instinct in assisting their masters… In fact, it is difficult to say what a shepherd’s dog would not do to assist his master, who would be quite helpless without him in a Highland district…”

“… They (shepherds’ dogs) watch their master’s small crop of oats or potatoes with great fidelity and keenness, keeping off all intruders in the shape of sheep, cattle, or horses. A shepherd once, to prove the quickness of his dog, who was lying before the fire in the house where we were talking, said to me in the middle of a sentence concerning something else: “I’m thinking, sir, the cow is in the potatoes.” Though he purposely laid no stress on these words, and said them in a quiet unconcerned tone of voice, the dog, who appeared to be asleep, immediately jumped up, and leaping through the open window, scrambled up the turf roof of the house, from which he could see the potato-field. He then (not seeing the cow there) ran and looked into the byre where she was, and finding that all was right, came back to the house. After a short time the shepherd said the same words again, and the dog repeated his look-out; but on the false alarm being a third time given, the dog got up, and wagging his tail, looked his master in the face with so comical an expression of interrogation that we could not help laughing aloud at him, on which, with a slight growl, he laid himself down in his warm corner with an offended air, and as if determined not to be made a fool of again.” 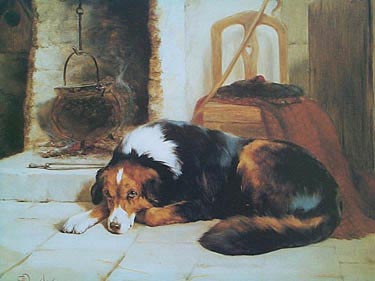