On The Scotch Collie Dog

The Collie Dog – the honest Highland Collie – is the King of the canine race. I don’t think there is a doubt about that. The Newfoundland may be the prime minister, but Collie is king. The average size of this dog, taken from recent measurements, is 24 inches, and we like them better if they are even smaller. A large dog will not work so well in a mountainous country. He has too much weight to carry, wants water too often, and is more easily beaten at his work.

The head is a particular characteristic. It is neither narrow in the skull nor broad, but it ought to show a good brain-pan. The Ears are small, lie well back among the feather, and when the dog is excited the ears are wholly or almost wholly pricked. A drooping, fox terrier ear is bad.

The eye is rather full than otherwise, and rather oblique – a bright, intelligent, speaking eye. The mouth is what shepherds call a small mouth, the muzzle is decidedly foxy, without being too short; the neck is long and rather arched; shoulders broad, rather deep, sloping, and well clothed in muscle; chest should be deep, rather wide, with plenty of room for bellows; forearms short, straight, sturdy, and hard to the feel, and elbow well let down; pasterns long and wiry; feet ought to be round, compact, and not spreading, and provided with a well-cushioned sole; ribs well rounded, back ones deep, and the back should be broad in proportion to the dogs size; hocks straight, and not turning in; stifles straighter than in sporting dogs, such as the Setter, but not too straight; hips are wide, and the thighs very well developed the tail ought to be moderately long, and feathered, but not so much as a Newfoundland’s. It is strong in bone, and the feather is the longest near the buttocks, and gets gradually shorter to the tip. The carriage of the tail is important. It is carried gracefully downwards when the animal is quiet, taking a sweep backwards at the lower third; as the dog gets lively, the tail is carried more gaily, and when excited it is so erect that the tip of the tail hangs right over the breech. 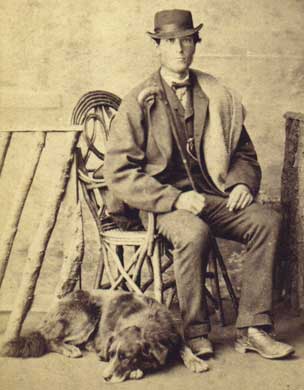 The Coat. – The mask is smooth, as in the Newfoundland. The coat elongates immediately after it passes the occiput; it is long and massive on the neck, and lumped on the shoulders, where it is called the mane. It is a straight coat all over the body, in texture rather strong, but softer and warmer next to the skin. The breast is well covered, and on the upper portion sweeps gracefully towards the chin to form the frill. On the breach it is likewise abundant, but though the forelegs are well feathered, as in the Setter, the hindlegs are quite bare from the hocks downwards.

Colour. – The best dogs are tricoloured – black on the body, with tan points, and a white collar, and chest, and forearms, and at times a blaze up the face, and a white tip to the tail. Dogs brown in body with otherwise similar white marking are also common.