From the files of Mr. Ed Lynn Jarratt

Do not be deterred by the length of this story; like all of Mr Jarratt’s writing, it is a pure pleasure to read!

Some of my most vivid childhood memories center around my dad telling me stories. In those days before television, whenever I was bored because stormy weather kept me indoors, whenever I was waiting impatiently for some visitors to arrive, whenever we were in the dark because of a power outage, or (much more frequently) whenever I just wanted to delay bedtime a little longer, my dad was usually good for a story or two. Besides the usual fare of children’s stories, he introduced me to many exciting episodes from the classics long before I was old enough to read them for myself. But the stories I enjoyed most and requested most often were his personal recollections of the two English Shepherd dogs he had as a boy and young man: Old Shep and her pup Bragg. As a little boy who loved dogs, I was thrilled by even the simplest accounts, such as how my granddad would get up in the morning before any one else was awake and go to the barn to feed the horses. Shep and her pups would be waiting when he opened the door, ready to storm past him and run straight to my dad’s bed to wake him. 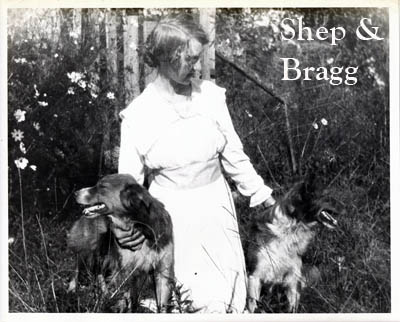 Sometimes after a long, hard day’s work in the fields, my dad would lie down in the yard after supper to rest on the grass and enjoy the coolness of the evening. Sometimes he would fall asleep, and several times he was awakened later during the night in the midst of dogs growling and snarling to find Bragg standing guard over him warning a stray dog to keep its distance.

Even more suspenseful was the story of how Dad road his horse after dark to the post office about two miles away to get the mail. On the return trip he began to notice slight sounds, such as an occasional rustling in the grass or scratching on the gravel, that indicated that someone was coming along behind him in the dark. At first he expected them to overtake him and identify themselves, but they seemed to keep back about the same distance behind him. He urged his horse into a fast trot for a while, but when he slowed down and listened, he could hear his mysterious follower coming along about the same distance behind as before. He then set the horse to a fast gallop, but when he slowed Reuben down for a breather, there were the telltale noises that said the unknown follower had kept pace with the horse and maintained the same following distance. At first Dad was puzzled – and although he wouldn’t admit it, I’ll bet he was a little scared. But then he had an idea and said, “Shep?” Almost immediately Shep was jumping around the horse and yelping in delight at being recognized. She knew she was not supposed to follow the horses when they left the farm and had kept her distance lest she be scolded and sent back home.

But the stories I enjoyed most were those that demonstrated the dogs’ intelligence and usefulness. No one in Dad’s family had any experience with herding dogs. They bought Shep just for a family pet because she was such a pretty pup. She was a grown dog when a man came to the farm to look at some pigs Granddad had for sale. When they went to see the pigs, they found that the pigs had gotten out of their pen and wandered some distance across a field. When Granddad told my dad that he would have to go drive the pigs back, the visitor asked why they didn’t send the dog to get them. They told him that she was just a pet and was not trained. Unknown to them at the time, the visitor was an experienced dog trainer. He replied that she was obviously a “blooded” dog and asked her name. He called her to him, pointed to the pigs, and commanded, “Shep, go get those pigs.” Granddad and my daddy watched in amazement while their “just a pet” dog trotted across the field and around the pigs and drove them back to the pen.

After that, Dad began encouraging Shep to help with the cows and hogs. She learned to help, but even more important was the experience Dad gained which helped him train her pup Bragg to become an even better stock dog than Shep. When Bragg was grown, Dad had only to tell him to go get the cows, and Bragg would go to the pasture alone and find the cows. He would round them up and drive them to the barn without any barking or chasing. He would follow behind the cows and only nip a heel if one tried to stop and graze.

One Sunday afternoon when my Dad was on his way to meet some of his friends at one of their homes, he was about a half mile from his house when he found that their cows had gotten out of the pasture and were out in a grain field. Dad did not want to miss seeing his friends, but he could not leave the cows out in the field. He stopped and began to whistle his special whistle for Shep and Bragg, and soon he saw, as he described it to me, two brown balls coming down the hill. He had Shep and Bragg round up the cows and drive them out of the grain field, and then he told them to take the cows home. He waited there until he saw the dogs drive the cows into the barnlot. He knew the dogs would watch the gate and keep the cows in until someone saw them and shut the gate. Thanks to the dogs, Dad’s Sunday afternoon plans were not ruined.

Once Dad went out to feed the dogs and found them missing. He called and called, and finally Bragg came. But he was excited and had no interest in the food. Instead he jumped around Dad and then ran a short distance back the way from which he came. Then he came back and did the same thing until Dad realized that Bragg wanted him to follow him. He led Dad quite a distance across the fields until they came to where Shep was caught on a barbed wire fence. She had gotten burs matted in her bushy tail and when crawling through the fence had snared the matted tail on the barbed wire. Then in trying to free herself, she had gone back and forth over and under the wire until she was hopelessly entangled. Dad had quite a job cutting through the mats to free her.

My dad liked to hunt, and so did the dogs, but as a young dog, Bragg was gun-shy. He would hunt fine until someone fired a gun the first time; then Bragg would quit and return to the house. An old hunter told Dad how to cure his gunshyness. Dad watched for a chance when Bragg was hot on the heels of a rabbit, chasing it by sight; Dad shot the rabbit so Bragg saw it drop before him. It worked! Bragg never ran from a gunshot again. Shep and Bragg hunted rabbits enthusiastically in the daytime, but at night when Dad hunted opossums, they totally ignored the rabbits that jumped up around them.

My favorite story of all of the Shep and Bragg tales was probably the one in which Granddad’s bull got out of the pasture and went to a neighbor’s house. I think they had butchered a calf, and the bull had scented the blood and was upset by it. The neighbor’s wife called on the telephone to tell them the bull was there. Dad and one of my uncles went to get the bull, and Dad took Bragg along to help. When they arrived at the neighbor’s, they found some of the family standing in the doorway of the house and others trapped in the barn. The bull was between the house and the barn. He was bellowing and pawing the ground with such vigor that he was throwing dirt over his back. Dad had told Bragg to follow at his heels. As they went by the house, the wife warned them to be careful that the angry bull did not hurt them. Dad and Uncle Brian just grinned and walked on. The bull was facing away from them, but when he noticed some movement behind him, he whirled to face the newcomers. When he turned, he scarcely gave Dad and Uncle Brian a glance; what caught and held his attention was Bragg following at Dad’s heels. And what an effect the sight of the dog had on the bull! “Like letting the air out of a balloon” was the way Dad and Uncle Brian described the bull’s reaction to the dog. The bellowing and pawing stopped, the bulging muscles relaxed, and the bull began to cautiously sidle away toward his home barn, all the while keeping a wary eye on Bragg, who was still waiting expectantly at Dad’s heels for the command that both he and the bull knew was forthcoming. Dad waited until the bull was clear of the yard before saying, “Take him home, Bragg.” The bull and the dog were gone in a flurry of dust… 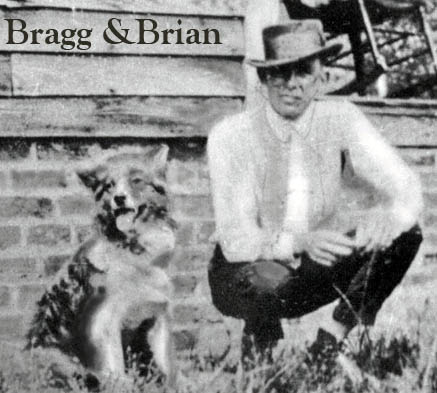 Although there was no registry for English Shepherds back then, Shep had been sold to my granddad as a purebred English Shepherd some time between 1910 and 1915. Bragg was born a few years later. It was probably 1925 when they were killed. My dad was always partial to English Shepherds and always tried to have one or two. He had other good dogs throughout his life, but none ever seemed in his estimation to quite measure up to old Shep and Bragg. 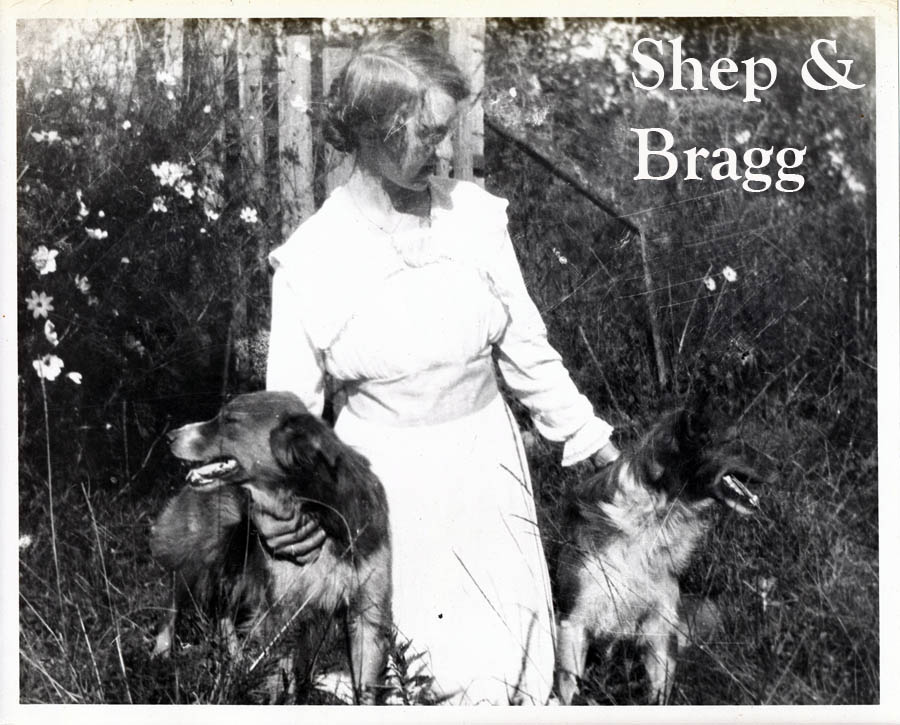