Article below from The National Stock Dog Magazine, Autumn 1958:

For More and Better Field Trials

The Invitational get-together near Quincy, Ohio, proved both educational and inspirational to all those who attended. About the first week in August we were among those who were invted to attend a sort of “cut and try” Field Trial at the pleasant farm home of Lewis Pulfer, Jr. Other guests and contestants present were Ralph Pulfer (brother of Lewis) from Pemberton, O., with his 8 month old English Shepherd “Spike,” Mr. and Mrs. F.S. Halsell, Edwardsburg, Michigan, accompanied by their 3 English Shepherds, “Debbie,” “Abbigale” and “Roger,” and also their two Belgians. The latter have made rounds of AKC shows and Obedience Trials. Mr. Halsell put on a very interesting demonstration with one of their Belgian Shepherds in obedience work and scent discrimination.

Mr. and Mis. Bialie and children of Lake Avon, O., were prsent. They are staunch admirers of English Shepherds. James Saylor of Belle Center, O., was there and exhibited a very likely prospect in the form of a white ring-necked tri-color English Shepherd pup still too young to expect much from in the line of actual stock work. Mr. Saylor was much interested in future trials and we hope to see him taking an active part before long.

Another neighbor of Mr. Pulfer’s, Paul Stewart, I believe, was there with his beautiful Palamino 2 year old mare. He said this was the third time she had been ridden and that she didn’t know what it was to be mean or to be abused. he had trained her entirely by kindness, since she was three weeks old. She allowed the Bialie children to ride her and she did some beautiful poses both kneeling and standing, for pictures to be taken.

Lewis Pulfer’s dog “Rebel” put on a wonderful exhibition of cattle working ability. Under direction of his master he would “go out and around” the cattle and “fetch” them to him, at any pont in the field. At the same time he could be easily directed to either the right or left and would STOP or DROP on command. He handled the cattle with sufficient FORCE when required but still was always well under control.

Incidentally the Pulfers told me that they had trained their EXACTLY according to the Training lessons which I wrote and published in the former English Shepherd News Letter, now the National Stock Dog magazine. 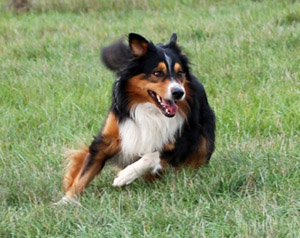 WE URGE YOU to follow these boys’ experience and SEE WHAT YOU CAN DO in YOUR locality. Invite all the STOCK DOG owners within about 100 miles of you to gather at your farm, or some appointed place. Suggest that they bring whatever they wish for a potluck dinner. A couple of clean hay wagons will make fine dinner tables. PLAY together and EAT together. I suggest that at first you let each contestant do his STUFF simply as a demonstration rather than a competitive, prize winning trial. It will work better for all concerned and may avoid some hard feelings, that we can’t afford at this in the point in the game, if ever.