Every historian carries the deep conviction that his story is important. If he wasn’t convinced when the subject was embarked upon he grows to realize that the story he tells is a significant one in the development of the overall picture. In this instance the History of Nevada, sheep and their products were an important and essential factor in the development of the state. Mutton and beef were the chief support of mining camp life. Perhaps not so glamorous as liquor, but nonetheless the base of keeping the mining industry growing. Without meat men cannot work…

Sheep in this world west of the one hundredth meridian was not the pastoral scene watched over by pretty boys and Dresden shepherdesses. It was a rough, tough job filled by rough, tough men. Grass was scarce and hay or grain nonexistent. The sheep had to keep moving in a flock, and that was a day and night job for there were many enemies abroad during the darkened hours…

Dogs could not write their story, and the herders who knew them so well had no interest in writing about them. Often the herders could not write either. Dogs for sheep tending have always been on a peculiar ownership basis. In theory, the owner of the flock owns the canine and burro. But it was the herder who took the ball of fur from its mother and raised and trained it for work with the sheep. So it was in many instances that the bond between dog and herder was so close that it held to the point of death. A dog died and the herder found another, but should the herder die, it was a different story. The dog stood by for days if help failed to come. Often when aid arrived he had to be forcibly removed from the body, and he brooded for weeks over the loss of his master. If he were left with the flock through the shepherd’s illness or death, he stayed with it until help came. Today many sheepmen breed their dogs just as thoughtfully as pedigreed show animals are bred. Bloodlines are recognized, although no written records are kept. Even today certain bitches produce litters whose members are spoken for before birth. 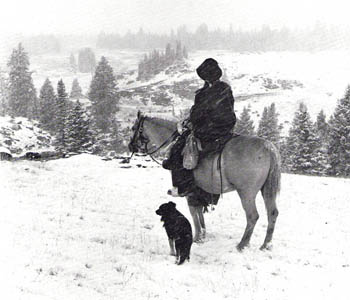 Every dog has its own personality, although sheep dogs show their common heritage. Of course, once in a while the exception comes along, and a small mongrel terrier will be the perfect sheep dog. It is said that Old English Sheep dogs many generations away from watching the flock when turned out with sheep go to work as if they had spent years with their flock. In Nevada most of the sheep dogs are black or merle with white and tan trimmings. Their eyes usually with pale coloring indicate an Australian shepherd line among the ancestors. Sometimes one eye is dark and the other light in color. The outer coat is stiff and water repellent, while the inner coat is of soft, dense, short fur which serves as insulation against cold or heat. With nose tucked under tail, the sheep dog is comfortable in the stormiest weather. The bobbed tail is a matter of expediency to prevent weeds and dry grass from sticking to the dog’s rear, and a short tail is more sanitary. Sometimes a Great Pyrenees dog is seen in this country. This is a Basque sheep dog closely resembling a St. Bernard. He is usually white or cream in color and works equally well with cattle or sheep. Evidently the conquistadores took the breed to South America, for it is sometimes seen in the Andes country today.

A dog may be in demand because of his bloodlines rather than for his puppy looks and behavior. Not long ago on a visit to a sheep camp, the author saw a gawky puppy dragging a great iron link chain. Efforts to make friends were futile. He would dash forward with his exuberant companions, but cringe back before he could be patted. When the boss was asked what the chain was for, he explained that the pup came from a bitch who produced these timid fellows, but that the pups developed into splendid reliable dogs when properly educated. The small one was due to go over the mountain to a buck camp under the eyes of a herder and an older dog, both excellent teachers. So this gawky, timid creature would be sent to a wise old dog and a man who understood canines and would make of him a good shepherd as his blood meant him to be. He was seen three months later, and sure enough, his fetters were gone and he was working along with his confreres, separating lambs for shipment. He was still shy, but he knew his business. He would never stray and would be faithful unto death to the master he recognized. Who claimed ownership interested him not at all, for his life would be spent serving his god, the sheep herder who trained him.

With the dogs the sheep come first, despite a deep devotion to the herder. The dog watches the flock when the herder is absent, even though he may be alone for days. He eats with the man and usually sleeps curled up near him. The slightest noise in the flock sends him racing to his charges. The sheep fear and respect him because he represents such authority as they can know. They go where he directs them and respond to his light nips as a routine measure.

Usually a young dog works with a veteran until he learns the way of sheep and herder. A shepherd may be a quarter of a mile away from sheep and dog, but the latter obeys his hand signals as quickly as his voice. Voice or hand, the dog carries out the orders. On his own he keeps the sheep from milling into suffocating groups in the face of danger. He will give his life to protect the stupid beasts from their enemies and he will stay with sick or injured sheep until human help comes. Even though he is alone without food or water for days, he remains at his post.

A bitch with a litter of pups sheltered at the ranch house for the birth will leave her own and go out with the sheep each morning, returning to her pups at nightfall utterly exhausted. Should a bitch meet death, a ewe may sometimes be persuaded to feed a pup. If she once feeds him he is her lamb. Without its dogs, the industry would have no alternative but fenced pastures for the flocks.