Life in sheep camp would be lonely...

Usually there would be one sheepherder in a camp. He, with his only companion a dog, would tend to the sheep alone for months at a time. The camp would be established in the center of the pasturage. When the sheep had exhausted the grass in the area, the flock and camp would be moved to another area and the process repeated through the season.

The loneliness of the sheepherder was noted by the Episcopal Missionary Bishop of Wyoming, Ethelbert Talbot, in his 1906 My People of the Plains:

The life of a sheep-herder is a peculiarly lonely one. Often months pass without giving him the opportunity of seeing a human being. His faithful dog is his only companion. He generally has a team and a covered wagon in which he sleeps at night during the winter, and wherein he stores the necessary provisions for his daily food. It is his duty to seek the best available pasturage, and, when the grass in one neighborhood has been exhausted, to drive the flock to a new and fresh supply….” 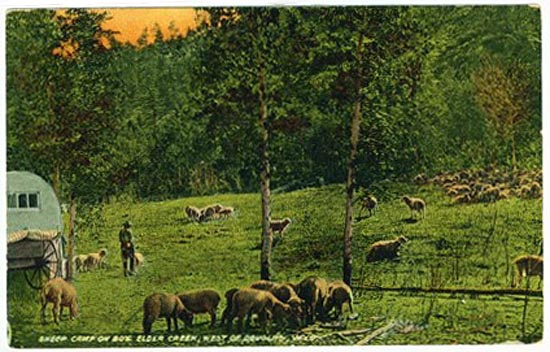