“…When my old dog died in 1965, I knew I could not be satisfied with just a plain dog, so I bought Rudyard Kipling from Thomas Kipp of Swannanoa.  Kipling was a black and white English shepherd.  He was descended entirely from Mr. Ed Emanuel’s (of the International Stock Dog Registry, Butler, IN) stock.

Kipling was probably the prettiest shepherd I have had overall.  He was a fine, intelligent dog, and an excellent stock dog who could be quite gentle with those who would move, but could be as forceful as the situation demanded.  Kip never ran a cow.  I fussed at him once for doing that, and he never ran a cow again.  If the cows would take off running, Kip would always come back to me as if to say, “Don’t blame me, I didn’t do it.”   He was the best watchdog I have ever seen.  He only barked when there was a good reason.  The other dogs would bark at a stranger or a dog going by on the highway, but Kip would only stand and look unless they came into the yard.  We reached the point that when the other dogs barked, we would look to see what Kip was doing.  I did not expose him to enough strangers, etc. as a puppy, and he grew up quite shy of strangers.  As he grew older he became snappish so that he was not to be trusted around strangers.  But he adored my mother and my small nephews. 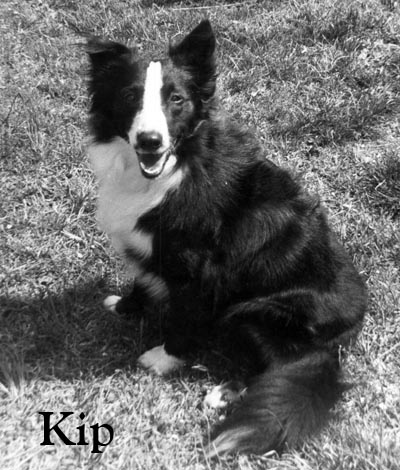 Since we lived on a highway, I had to keep him confined as a puppy except when he was out with me. With no other dog to take the lead, he was so utterly dependent on me that he would not think of letting me out of his sight. So I let his real training wait a little longer in order for him to develop as much independence and initiative as possible, but he learned quickly. The first time I tried to teach him to beg, I set him in a corner where the walls would give him support. Twice I raised him up and gave him a tidbit, and twice more he raised himself up, using the wall to steady himself. The next time he dropped his reward and came out of his corner to get it. The sixth time I decided to see what would happen with him away from the wall. When I told him to beg, he tried, but he lost his balance. Then of his own accord, he walked over to his corner and leaning against the wall, raised himself up to a begging position. That was before he was five months old. He could do the trick very easily at seven months old, along with shake hands, speak and sit.

But the thing he really excelled at was retrieving. Throw a ball anywhere and he would find it. Even if he didn’t see where it landed, I would just point out the general direction, he would run in circles until he found it. Once it bounced into a field of high weeds and grass and then rolled farther than I thought possible. He hunted for at least fifteen minutes before he found it that time. He had very good scenting powers. I sometimes threw sticks into brush piles where there were plenty of sticks from which to choose, but he always brought back the one that I threw.

A few days before Kip was four months old, five yearling heifers came up to our barn. Kip, who had never seen any cows except our quiet gentle old cow, didn’t like those wild running things. When I drove them into an old pasture we had there, he ran with me, but he kept his distance from them. They promptly jumped the fence and left.

Five hours later I learned that my neighbor had just recently bought them, and he and two other men had been hunting them. But each time they found them, the wild calves would break away and lose themselves in the woods.

I had nothing special to do that afternoon, and I thought perhaps I could pick up their tracks where they jumped my fence and follow them. I took Kip along just in case I found them that he might have an introduction into driving cows. I never dreamed for a moment that a four-month-old pup who had never in his life hunted a cow could possibly be of any help.

I followed their tracks for a little way and then lost them. I made several circles of the area looking for tracks before I realized what Kip was doing. Most of the time he was pulling at my pants leg and making a general nuisance of himself as usual. But at one spot, each time I came to it, he ceased his play and trotted on ahead. Finally, on a hunch I followed him. After a time I began to see their tracks again. Finally I could see plainly that they had crossed a field, and I started across on their trail. But Kip left me and headed for the edge of the field. I thought he had gotten tired and was headed for the shade. But I had not gone ten feet before Kip barked, and I saw him looking intently into the woods. I went back, and there were the heifers, hid in the bushes. I headed them toward home, but several times the wild things ran ahead and tried to lose themselves in the woods. Each time I went to the spot I last saw the calves; Kip would take the lead and take me right to them.

Kip was the best dog for catching a chicken I have ever seen. He never caught them himself, but show him the chicken I wanted, and no matter how wild it might be, he would send it right to my feet. He would work around the chicken until he had it watching him and moving away from him instead of watching where it was going; then he would get it in just the right position to rush it and send it fluttering right to my feet. If I missed my grab, he would stop his rush, circle around and start all over again. And as soon as I caught it, he would back off; there was no jumping up and grabbing at it and trying to take it away as some dogs do.

As he got older, Kip’s real talent was as a cow dog. He was very quiet and could maneuver around them without stirring up any excitement. He never chased them. He would get in position and then jump at them to make them move as he wanted, and if they moved, that was all he would do. If they refused to move, he would heel them. Otherwise, he never bit unless they tried to kick or fight him, but woe unto the cow that tried to get the best of him. My cows learned quickly. I saw one chase all the other dogs out of the pasture, but when Kip trotted in front of her, she turned and came back as meek as a lamb – she knew only too well what would happen if she threatened him. With Kip you could go to the gate and tell him to bring Jan, bring Julie, bring Polly, and he would go get the one you wanted, because he knew them by name. In his twelve years with me, Kip never once failed me in a tight spot. 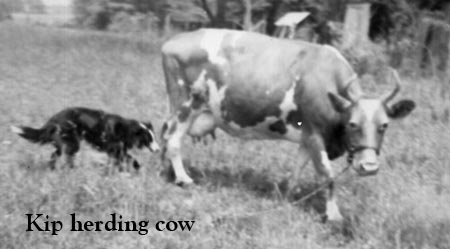 Kip would go with me around the cows and goats and seemed to know just how far it was necessary to keep out of the way, as not to disturb them. He so completely ignored them that they would watch him come quite near without either fighting him or running away, and yet they reacted much more to the other dogs. The trick seemed to be that Kip avoided looking at them. He would trot practically under their noses and look the other way while they stood and stared. But when I would tell him to bring one of them to me, he would set his eyes on them with a stare that seemed to say, “Heaven help you if you haven’t moved till I get there,” and they would move. He would stand around and appear to be paying no attention while I worked around the cows, but nine times out of ten he would just happen to be “accidentally on purpose” in just the right position to turn one back from a wrong gate or path. Kip was just about perfect with the cows – handle him right, and if the cows are gentle, he could move them with never a bark or a nip, but I have seen one cow get so rough that he couldn’t control it. He was only a little over a year old when a young cow we had suddenly turned mean. She charged me and did her best to gore me. She probably would have succeeded if Kip had not charged in, snapping at her nose. Kip worked the goats well too, but tended to get a little too rough – preferring to use his teeth to save steps.

My neighbor was given a collie named Fred that had been terribly mistreated, and he could not do a thing with the dog. Fred came down and took up with Kip and then with me. Ordinarily, he was quite obedient, but when he got excited, there was no controlling him. Fred would run on the outside of the fence and caught on that if he went to their heels, the cows would move. One day I came by the pasture and before I realized what had happened, Fred had run out toward the cows. Jan was used to Kip coming after her, so she threw up her head and headed for the house. I yelled at Fred, but he didn’t hear a thing. He just kept going and pushing her as hard as she could go. I came on after them as hard as I could and thought that surely he would stop when they got up to the gate there at the barn. No … when she got to the gate, Fred jumped under the fence, turned her around and headed her toward the woods as hard as she could go. I could just see old Jan piled up down there with broken leg in a stump hole, or a broken neck in a branch trying to jump through. When they went by, Kip joined the chase. I thought I was in real trouble with two dogs after her, but I underestimated Kip, as I frequently did. When he caught them, his objective was the collie instead of the cow. He downed Fred and gave him the thrashing he deserved. Fred tucked his tail and came back to me, and Kip brought the cow back to the barn at a quiet, slow walk.