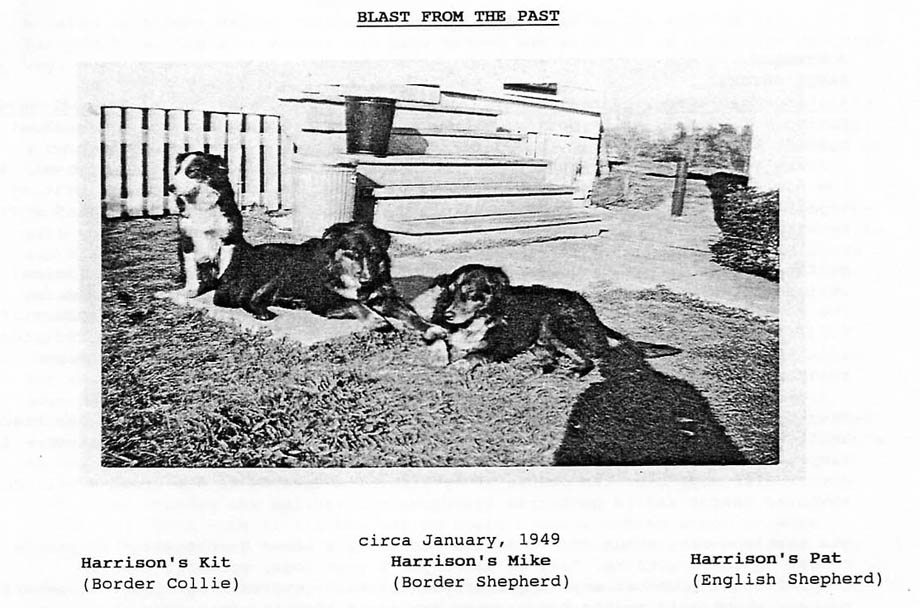 “Daddy ordered Pat from Mr. S.C. Shipp of Lebanon, Tennessee, and he was shipped to us by rail in 1939. A tricolor, Pat’s Southeastern Kennel Club registration certificate said he was an Old-Time Shepherd. It wasn’t until the 40’s that the name English Shepherd became common.

Although we had a lot of dogs, all purebred, Pat was the only one who had the run of the place — the yard dog. All the others were kept in kennels. My parents made Pat go along with us kids when we went swimming, horseback riding, etc. Momma even insisted Pat accompany me on dates!

Daddy provided a cottage for Uncle Bud, our stable hand. Uncle Bud’s house was located in a far corner of our farm and to get to the stable Uncle Bud had to cross through the cow pasture. This field was the domain of Mucho Hombre, our Jersey bull. Mucho hombre was very bad tempered and particularly liked to terrorize Uncle Bud. When Uncle bud complained that Mucho Hombre wouldn’t let him get to the stable, I suggested he have Pat help.

So Uncle Bud stood at the gate and yelled “O-o-o-o Pat! O-o-o-o Pat!” in his quavering voice. Pat ran up and nipped at Mucho Hombre’s heels. Mucho Hombre bucked and kicked at Pat, but Pat kept circling and nipping. Eventually Mucho Hombre spun around so much he made himself dizzy! All he could do was stagger. After a few days, all Uncle Bud had to do was holler “O-o-o-o Pat!” and Mucho Hombre would tuck tail and run!

When we decided to breed Pat, Daddy got Kit. She was a cutie pie pup and matured into a beautiful Border. Their son Mike was registered as a Border Shepherd with the UKC.”