Dogs on the Frontier

Excerpts from Chapter 3:
Shep and Rover on the Range

…Since ancient times in the Old World, specialized breeds of dogs have been raised for guarding flocks, and so it was natural that the Spaniards should import sheep dogs to the (American) Southwest… the dog was vital in protecting a flock from a lobo or sheep-killing dog. For this purpose, they voted for the collie…

Spanish-trained dogs kept all the sheep close together, rather than in the loose English fold formation. Geography determined the difference in the two methods in the Old World and would do so again in the New. Spanish dogs had to move New Mexican sheep over long distances, so they had to travel slowly in compact form; no loud barking or sudden moves were wanted. Thus Spanish dogs were taught to observe the men’s signs, for the flock was too big for the master’s orders to be heard. The dog also placed himself between his own flock and that of another dog to prevent mixing. Any trespassing sheepdog would be killed. 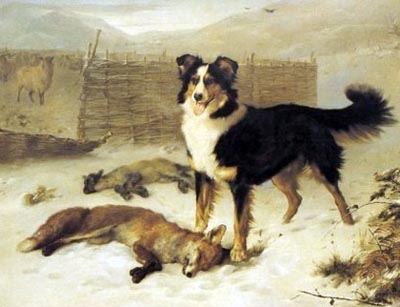 After the English-speaking American settlers began to expand sheep raising into a big business it was found that neither the pastor (flock-master) nor the Mexican dog fitted “Anglo” traditions. Imported collies failed, too, for they had to unlearn British ways and adjust to the compact western flocks. Collies did, however, prove best for the hilly sheep ranches of Texas where rock fences and short drives were typical, for here their quickness and skillful watching paid off. Once frontier conditions had disappeared, collies could come into their own, for now sheep might graze loosely in relative safety.

…Josiah Gregg, expert par excellence of the Santa Fe Trail which he traveled for nine years and of the life in that region, wrote of the much-maligned sheep dog:

The well-trained shepherd’s dog of this country is indeed a prodigy: two or three of them will follow a flock of sheep for a distance of several miles as orderly as a shepherd, and drive them to the pen again at night, without any other guidance than their own extraordinary instincts.

During the Mexican War, the Army of the West, sent to occupy New Mexico for the United States, came across many of these animals, and the American soldiers noted that the dogs they saw near Santa Fe were shaggy and generally yellow and resembled wolves, but unlike their distanct cousins, they attended the sheep with wonderful loyalty. Like most soldiers who have been stationed in an occupied territory, Colonel Stephen W. Kearny’s men lived off the land. One day they tested the sagacity of a sheepdog in their attempt to “liberate” some woolies for their military supper:

A flock was feeding near the road, attended only by a large dog, and one of the men (Light) fired his musket at one of them and shouldered it. At the crack of the gun the dog ran around the scattered flock, herded them in an instant, and then made chase after the man and forced him to drop the sheep. The soldier, however, being very hungry, finally succeeded in carrying off the sheep. 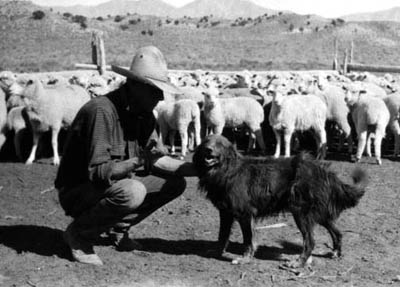 Perhaps too greatly influenced by romanticism, J.H.Lyman asserted during the bloody 1860’s that the Indian maraudings of those years had produced a number of sheepdog heroes… Lyman concluded, “I very much doubt if there are shepherd dogs in any part of the world except Spain, equal to those of New Mexico in value.”