Dogs on the Frontier

Excerpts from Chapter 3:
Shep and Rover on the Range

William Taylor, clergyman and long-time resident of California spoke similarly of sheep dogs in his own state. A dog he passed one day kept Taylor’s party at a respectful distance from his charges. “Those dogs,” enthused Taylor,

“are very common in California, and guard the sheep committed to their care with ceaseless vigilance day and night. But for them the coyotes, which are very numerous, would make dreadful havoc among the sheep. I heard of a California dog that took special care of the weak lambs of his flock, and was frequently seen to pick up the lagging lamb, and carry it in his mouth to its mother. Such illustrious examples in the canine tribe excite feelings of profound contempt against those lazy dogs that do nothing but eat, and sleep, and snap at the children.” 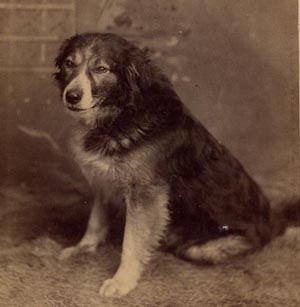 Joseph G. McCoy was the pioneer of the Texas long drives from the southern plains to the Kansas stock pens of the 1860’s, and yet this extraordinary cowman had good words for both sheepdogs and their worthy Mexican masters. Of the latter, he wrote:

“(One) will sigh to lose his friend; groan if his wife or child dies; but if his dog is lost by death, his grief is overwhelming and his anguish cannot be assuaged. The flocks are enclosed in corrals at night, the shepherd sleeping with them, whilst the faithful, vigilant dogs maintain constant guard outside the corral…”

… In 1882, a wanderer in northern California was told by a shepherd he met that his three dogs were worth more to him than the two boys he had hired at the magnificent sum of fifty dollars a year, board and clothing, for herding four thousand sheep which he could leave alone for hours in the charge of one dog.

This heavy and lonely duty placed on “Shep” surprised eastern visitors, used to seeing shepherds and dogs as inseparable pairs. One tenderfoot of the ‘seventies described a California scene:

Around each flock or band of say a thousand sheep are half a dozen dogs of a peculiar breed — dogs whose progenitors were imported from the sheep pastures of the old world. These dogs take the entire care of the sheep, drive them out to pasture in the morning, keep them from straying during the day, and bring them home at night. These dogs have inherited a talent for keeping sheep, but the shepherds do not depend wholly on that.

In the last sentence he was referring to the old Spanish custom of using a foster-mother ewe to train a puppy. 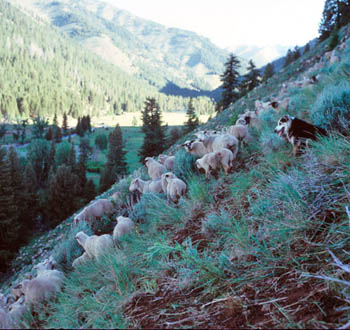