Excerpt from The Shepherd’s Dog

Note: Mr Hartley lived in New Zealand and his dogs were selected for work on sheep ranches in that country rather than in the U.S. Nevertheless, his description of Doon captures many experiences common to farmers, ranchers and dog trainers worldwide. Doon is a dog after my heart! The photos below are from The Shepherd’s Dog; they do not specifically illustrate the story of Doon but are interesting nonetheless!

“Almost everyone who rears a pup from parents which are well known to him entertains a secret hope, even against his better judgment, that it will possess all the good qualities of the parents and none of their faults. However, its first work on sheep could quite conceivably put an end to such reckless optimism, were it not that the refining process of training and discipline often culminates in the discovery of unexpected and valuable talent. This unexpected ability very often lies hidden in a maze of faults which would condemn the dog to languish forever in mediocrity, destined throughout his working life to create trouble for himself and his master, unless his work was carefully supervised during the formative period.

Doon was just such a dog. There were times when I could have parted with him very cheaply indeed. He went about his work with such unnecessary vigour that sheep would not tolerate his handling. He was headstrong to a marked degree, a condition which dominated most of his work throughout the whole of his training… He was extremely cunning and would invariably take over the supervision of the right-hand wing of a large mob of sheep, but woe betide any young dog which in its innocence and enthusiasm dared to join him. Doon would make it quite clear that no help was required by the simple expedient of bowling the youngster head over heels. 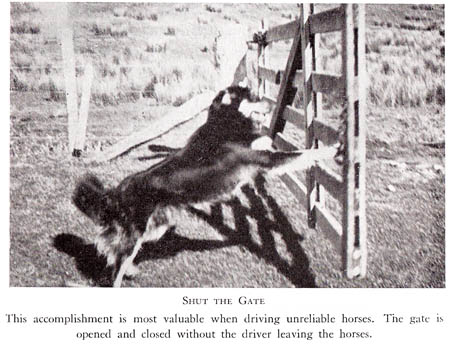 I had good reason to look askance at “Master Doon”, as I felt that he had a very high opinion of himself which was quite unjustified at this juncture. Then one day as I rode ahead of a mob of sheep with Doon at heel something happened which changed any notions I had regarding his capacity or lack of it. Away below me the sheep in the holding-paddock had discovered an open gate and were filing out intent on joining my mob. The other dogs were behind my sheep and something had to be done quickly. In desperation Doon was sent off to drive those holding-paddock sheep back where they belonged. They ran before him towards the open gate but had no intention of re-entering that bare paddock. It was then that Doon’s sagacity first showed out. He gathered the sheep together with all the competence of a much more experienced dog, positioned himself correctly to thrust and parry their efforts to escape, and returned them all to their paddock. Amazingly, he completed the job in a way which indicated clearly that he knew what he was doing and how to do it without help from anyone. I almost raised my hat to him upon his return but gave him a pat instead…

It is often said that the greatest things a dog does are the things he does well of his own volition. These are often accomplishments which no man could teach. I discovered quite by chance that Doon if given 150 sheep could pilot them home alone to the woolshed paddock, a distance of half a mile over the hills. To do this he had to steer the mob across a flat stretch of ground to a creek crossing, where the lead invariably attempt to climb a spur which was off course. Thus he had to turn the lead and at the same time exert some pressure to keep the others crossing the creek. Once this was negotiated, he had to steer the mob to a gate opening on to a bulldozed track which wound its way to the top of the hill. Considerable pressure was required to drive the sheep up the hill, where there was another open gate through which he had to make them pass. He then had to drive the mob some distance down a gentle slope and through a third gate opening into the woolshed paddock. When the last sheep was safely through Doon would lie down in the gateway to await my safe arrival. 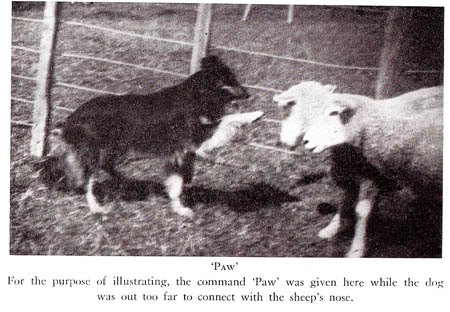 Did Doon reason all this out? How, one might ask, can an animal which has no vocabulary exercise reason? Or did he just realise instinctively that the sheep were intended for the woolshed paddock? Whatever the answer to these questions, he was right in his assumption about the woolshed paddock, which made his action just as effective as if he had reasoned the whole thing out. In this connection, too, it is interesting to note that Doon always made it his business to return on every possible occasion to the places where he had previously picked up cast sheep.

This aspect of canine behavior is important since it has considerable bearing on your ability to understand each dog you handle and to make the best of the talent he possesses. Inborn cleverness is easily nullified by unsatisfactory training.

The important thing, of course, is to recognize that the dog does “instinctively realize” but not to tax his capability to the extent that reasoning is expected of him. The ability of the shepherd to “read” his dog and to know what he has in mind makes for mutual understanding. This enables the observant shepherd to exploit and encourage natural talent in his dog. It is a continuation of the policy which I advocate — “to bend and shape that wealth of material within the dog which may be utilized in his training.”

All in all, Doon was a grand dog and I was recompensed in a hundred ways for any part I played in his development. “