“… I was reared in what is now an all-but-abandoned section of Vermont, the town of Vershire… there wasn’t a lot of wealth in Vershire, and we had to make do with as few dogs as possible. So nearly everbody kept dual-purpose canines. I learned from their dogs, as well as from many of my own, how versatile such animals can be.

“Of course, we had those wonderful old-fashioned shepherd dogs, which besides doing the farm chores (even to taking down the bars and fetching home the cattle), accompanied the children — sometimes two or three miles — to school. And they were there on the minute to take them home again. At my school I’d often look out at 3 o’clock and see a pack of shepherds pacing peacefully around, waiting for the door to open.

“At night, in autumn, many of those same dogs would hunt coons, and in the daytime squirrels. They were silent trailers, to be sure, and their noses weren’t as keen as those of hounds I’ve owned, but their engergy made up for the lack. I remember them bouncing rapidly through the woods, surprising coons that we’d often find on cornstalks or up small saplings. They really got ’em. I’ve been a coon hunter all my life, and for real coon-getting dogs I can count several farm shepherds among my best. True, we missed the music that, in later years, I have hunted to hear. But in my early days the money we got from coon hides loomed large.

“There was Tige. I never knew why we called him Tige; he wasn’t striped and he was the mildest dog — a shepherd — a person could ask for. But no dog we ever owned saved us as much walking or gave us more fun than old Tige. I was about 12, I’d guess, when he was in his prime. Anyone in our family could say to him, “Tige, go up on the hill and get the oxen,’ and he’d go. He’d come back behind the yoke, which was what we called a pair then, whether they were yoked or not. Or we’d tell him to get the cows, and he would, leaving the oxen.

“At night Tige was a coon dog — a still trailer — and one of the best. All we had to do was go out into the woods and sit down around the lantern. He’d go off an hour at a time, if necessary, and we might hear him half a mile away. If he had a fault, it was ranging too far. We learned to sit on the top of hills; if we didn’t, as like as not he’d be in the valley on the other side — and there he’d stay until we found him. Neighbors sometimes brought Tige back the next day, along with a coon (or as many as four) they had shot out for him. Everybody knew Tige, and I gues just about every able-bodied man had been hunting with us at least once.

” . . . In those days a dog was one of the family. He wandered in and out of the home, usually slept in the stable and acted as watchdog and alarm dog — waking the family when anything was amiss in the barn. Sheep dog, too. I think the power those Vermont shepherds had over sheep was uncanny. Nearly every farm had a fairly large flock, and the dog was as good as a man. It always filled me with awe to see old Shep force a ewe to adopt an orphan lamb — a task we couldn’t accomplish.

“One ewe might lamb triplets, another have one and lose it. Most farmers skinned the dead lamb and sewed the skin onto the one to be adopted, and a ewe would generally adopt it. My father never had to bother; he’d just set the lamb in the pen with the foster mother-to-be and call Shep. In he’d jump, then simply stand and sort of hypnotize that ewe, which, for some reason, dared not disobey him. She’d let down her milk, and the lamb was hers.

“This same Shep was a many-purpose dog. Up on the hill behind our home we had an excellent apple orchard. Porcupines got to coming in from the hedges and eating applies, shaking them from the trees by their clumsy climbing. Shep, who had been quilled, never barked at a porky when he hunted for us at night. But now he seemed to sense that the hedgehogs were troubling us, and he took it on himself to drive them out. So he spent nights in the orchard, and when they climbed apple trees he’d bark until my father or I went out with a lantern and shot them. We got thirty-one in all.

“During the day Shep completely rid our farm of woodchucks. He’d lie still as death beside a burrow and just wouldn’t miss a chuck. And we boys could hunt rabbits with him. He was a retriever, too — always carrying the dead rabbit back to us. If my mother wanted a certain hen for the table, she’d say to Shep, “Hold that one,” pointing out the bird. Shep would pin down the hen in an instant, never biting her, until mother grabbed the squawking creature. Actually, we never kept a single-purpose dog on the farm during my life there.”

“Once in a while the neighbors hunted dogs in pairs. There was one pair, used only for hunting rabbits, that was mighty cute. Our neighbor never bothered to carry a gun with him, just took this pair of shepherd-beagle dogs and went rabbiting. Together they would get a rabbit started. They might run it together for a circle, but then one dog would simply lie flat and stay motionless, the other driving with a high-yipping voice. When the rabbit compled the second cirlce, the first dog would rush it and crush its head, then carry it to his owner.” 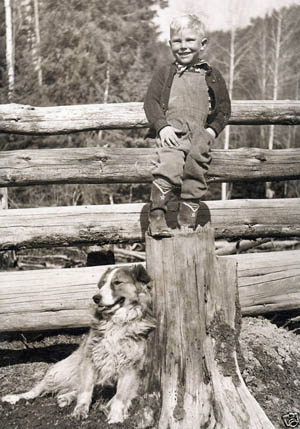