An early American source on the Scotch Collie, this book covers every aspect of agriculture from breeds of livestock to barn construction to farm economics and includes many beautiful engravings. It shows that Scotch Collies were well known and commonly used in America before dog shows and Queen Victoria boosted their popularity, it also shows that the English Shepherd was common on American farms in the mid-nineteenth century.

Whenever sheep are kept in such numbers as to constitute a considerable flock, the owner can well afford to keep a good shepherd’s dog. One who has never seen a well-trained shepherd’s dog can form no idea of their extraordinary sagacity and usefulness. We have ridden leisurely across a wide prairie in a wagon, accompanied by a Scotch colley, half-breed slut, driving five hundred sheep better than three men could have done without a dog.

If there were none but such dogs in the country, there would be ten times as many sheep kept. One man would be entirely competent to manage a thousand. He should have two dogs, so that they would be company for each other, and so that, in case of accident to one, the other would remain serviceable.

The Scotch colley very much resembles a prairie-wolf (coyote), having a broad forehead and pointed nose. The ears are short and upright, the fleece shaggy and slightly curly, with a bushy tail. These dogs are very intelligent, docile, and faithful, and possess an instinctive sagacity in everything that relates to the care of sheep. In a pleasant little book called “Anecdotes of Dogs,” some wonderful evidences of the sagacity of Scottish shepherd dogs are to be found, and they should be read by all farmers’ boys. 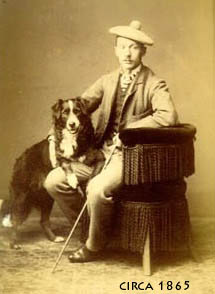 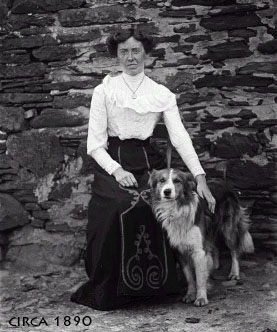 The English shepherd dogs vary considerably in appearance from the Scotch. The hair is smoother, and they do not appear so distinct a breed as the other. Both are of medium size, perhaps about fifteen inches high. The Irish shepherd dog is larger and more ferocious; some of them would tear a man sadly, if he interfered with the flock at night while in charge of the dog. The Scotch dog is always gentle, and generally very affectionate. In France, the shepherd dogs are somewhat like the Scotch, but smaller. The Spanish shepherds have a breed of dogs peculiar to that country. They are the size of a full-grown wolf, with large head, thick neck, mastiff-looking, fierce and strong, and are often armed with a spiked collar, to make them more formidable to jogs, wolves and bears, if the should attack the flock. Their color is generally black and white – their daily ration tow pounds of black bread, with milk and meat when it can be had. In Spain, the great flocks of the country, always in charge of shepherds and dogs, make long migrations every year from their lowland home to the mountain pastures, two or three hundred miles distant, feeding all the way in the roads and commons.

Sheep are the wealth of Spain, and without the aid of shepherd dogs, that wealth, under the present system of management, could not be produced.

Excerpted from: Facts for farmers: also for the family circle. A variety of rich materials for all land-owners, about domestic animals and domestic economy; farm buildings; gardens, orchards and vineyards; and all farm crops, tools, fences, fertilization, draining, and irrigation