When Champion Siegenjagenheim Lazy Bones, a Basset Hound owned by Chris Teeter of Detroit, limped into the show ring for the group judging at the Oakland County Kennel Club show last night at the Detroit Artillery Armory, few gave the dog a chance to go on to win Best in Show…

Alva Rosenberg of New York, who was judging Hounds at the time, walked over to Teeter and at the moment every indication was that Lazy Bones was about to be excused.

But Teeter, who is president of the Detroit Kennel Club , argued that Lazy Bones’ lame condition was only temporary and for that reason he could not be disqualified.

After looking over all the other Hounds, Rosenberg finally selected the sad faced, long eared Lazy Bones as best Hound, thereby qualifying him to advance to the finals. 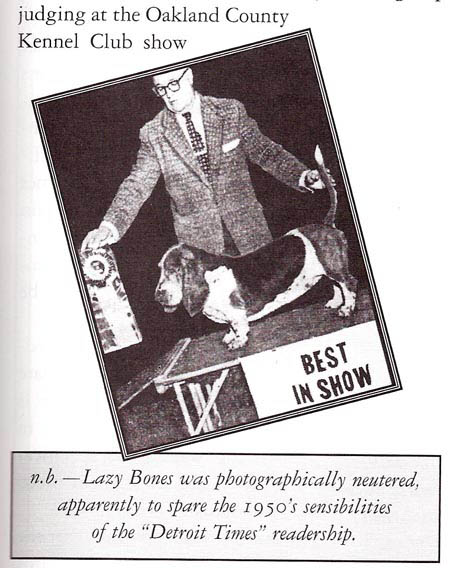 Note:
The article above was included for discussion in Ann Hier’s Dog Shows Then and Now. Ms. Hier posed the following questions for consideration:

“1. Should dogs be judged solely on their conformation, without regard to soundness?

2. Can anyone, even a veterinarian, make the determination that lameness is only “temporary”?

3. What logical explanation or justification can there be for a judge to award prizes to a dog which is lame?”