Ask an English Shepherd breeder what their puppy buyers ask for and one of the most common responses will be a particular color. Likewise, if you listen to discussions between dog breeders, one of the most common topics of conversation is coat color or markings. Why all this attention to color? What is the significance of color or markings in an English Shepherd?

COLOR AS A FEATURE OF GROUP IDENTITY

Color is often a signature of livestock/dog breeds. In some cases, this reflects the utility of a particular color or set of markings in a specific situation. For instance, Livestock Guardian Dogs used to protect flocks of sheep are often large white dogs; one explanation given for their white color is that it allows the dog to “blend in” with the sheep better. In other cases, the original color restriction was based on aesthetics: people just liked the looks of a particular set of markings. Finally, color has been used as a proxy for “purity” of breeding. Clean, distinct markings of a particular pattern become associated with a particular type of dog, and that set of markings quickly becomes a “trademark” of the type. Dogs displaying the markings are readily identifiable as belonging to that particular group. Each of these justifications for color preferences can be found in English Shepherd history. The particular color/ markings preferred have varied, however, from breeder to breeder and over time.

Black and tan English Shepherds are beautiful. However, Mr. Stodghill’s strong bias in favor of this one type, and his conviction that sable dogs or “off color” dogs (with white markings) were less desirable or not “true” English Shepherds eventually contributed to a split in the community of English Shepherd owners. The English Shepherd Club was founded in 1954 in part because of the bias against dogs with markings other than black/tan.

Color and markings continued to play a role in breeding decisions in subsequent breed history. One commonly encountered view was a bias against “mixing of the colors”. Black & white, sable & white, and black & tan dogs were all permissible, but crossing these types was discouraged. The breed standard which was eventually developed by the ESC reflected this bias by faulting solid black dogs (which most commonly result from crossing a black/white dog and a black/tan dog). The distribution and extent of white markings permitted also influenced breeding decisions. Prohibitions against excessive white, either on the body or the head, could influence the desirability of pups. Finally, the distribution of pigment in other areas – such as on the nose, or the roof of the mouth – was a factor in determining the value of a dog in certain parts of the country. Dogs were required to have a solid black nose, and a black-roofed mouth was considered a sign of a good dog.

Some of the strictures regarding color have their roots in the relationship between color or markings and health. The most prevalent concern here has to do with the association between lack of pigmentation and various disorders.

The Merle coat pattern results from a dominant gene (M) which causes patchy dilution of the coat color. The effect can be very striking and beautiful when this gene is inherited from one parent. If the gene is inherited from both parents, however, the offspring may have hearing loss, vision problems including small or missing eyes, and possible infertility (Little). The health effects seem to be worse if a gene for white markings is also present. In Shelties, Collies, Border Collies, and Australian Shepherds, all of which normally have fairly extensive white markings, the MM white has a strong probability of being deaf or blind. Merle dogs are not registerable as English Shepherds, and because the gene is dominant – it can not “hide” and skip a generation – it is no longer present in the breed.

The various genes which cause white spotting are present in English Shepherds however, and some of these genes are associated with hearing loss as well. Hearing loss is associated with excessive amounts of white, and in particular large amounts of white on the head of the dog. Dogs with white ears seem to be at highest risk. The stipulation that white face blazes should not extend across the top of the skull was likely a reflection of this concern.

Finally, there is a gene series called “Dilution” (D) which includes a recessive gene (d) associated with skin disorders in some breeds. There is no evidence at this point that English Shepherds are affected by the skin problems which have occurred in some breeds in conjunction with this gene. 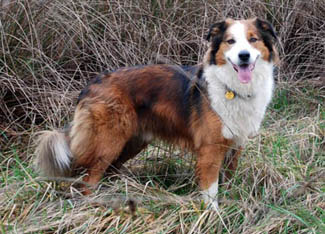 This is not to say that color is entirely irrelevant to how a dog works, however. Some shepherds and stockmen believe that color influences how livestock respond to a dog. Mr. Stodghill alludes to this in his breeder’s manual when he states, “…In those Pre-Historic days all English Shepherd dogs were dark colors because the little lambs would follow a light colored dog.” Border Collie trialers have tended to favor darker dogs for a similar reason. One author writes as follows:

“Most shepherds do not like a dog with too much white or a pale dog since sheep mistake it for another sheep and challenge it more. This is not a problem on home field where the sheep learn to either respect or ignore the dog on its own merits. At a trial on strange sheep it can make the difference between winning and not even qualifying. A dark dog such as a black, dark slate, or liver will carry the most respect… The least respected by the sheep are the predominantly white dog or the yellow dog, or any very washed out double merles, since these colors approximate a sheep’s own color. For a number of years a woman was trialing a lemon and white male who worked very well at home. At trials he was constantly challenged, and sheep walked up to him to investigate. He developed an attitude and started gripping in retaliation. Finally his owner had a black jacket made for him, and the problem stopped.”

Because English Shepherds have been used primarily on their owner’s livestock rather than being selected for trialing, the significance of darker vs lighter colors has been much less. Color is ultimately less important than the behavior and bearing of the dog in determining how stock respond, and given more than the few minutes allotted in a trialing situation, color ceases to be an issue in determining effectiveness.

The last question to consider before moving to the genetics of coat color in English Shepherds is whether color and markings are related to temperament. Certainly popular culture has created some associations for us… in movies, black and tan Rottweilers and Dobermans are aggressive “attack” dogs; sable and white Collies and St Bernards are gentle nurturers; the black and white Border Collie is super intelligent. English Shepherds come in all three of these color combinations, and the response the dogs evoke frequently depends on which stereotype they tap into. But is there anything to this..? Probably not. All of these variations in color and markings are historically associated with the herding dogs from which English Shepherds derive. Black and tan shepherd dogs existed before the color became synonymous with the “devil dog” in The Omen. Sable and white and black and white pups occur in the same litter (photo). There is no reason to believe that color genes are intrinsically linked to behavior within the breed. 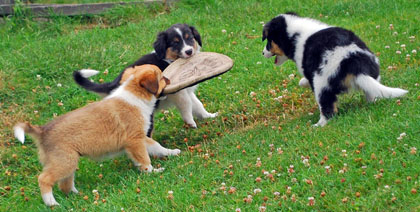 There is another way color can become associated with variations in temperament however; individual breeders may create distinct lines and adopt a particular color as their breeding “trademark”. To the extent that breeders select for different or distinctive temperaments, an association can be created – this breeder prefers very gritty, tough, high drive dogs; that one prefers easy going, stoic, guardian types. If the first breeder also prefers black and tans, and the second likes sable dogs, an association may develop within those breeders’ lines. This association is a product of selection by the breeder for color AND a particular temperament, however, and will not carry over to other, unrelated lines, within the breed.

THE GENETICS OF COAT COLOR AND MARKINGS

Color genetics are relatively simple and color/markings are among the most easily manipulated features of a dog. While it takes many generations to “set” complex traits in a line, color can be altered from one generation to the next quite easily. The simplicity of color genetics is one reason why it is such an attractive topic of conversation among breeders… here’s something we can actually (almost) understand, and over which we have some control!

For a brief overview of the color genetics in English Shepherds, see part 2 of this article.