Dover is the dog that started Shepherd’s Way 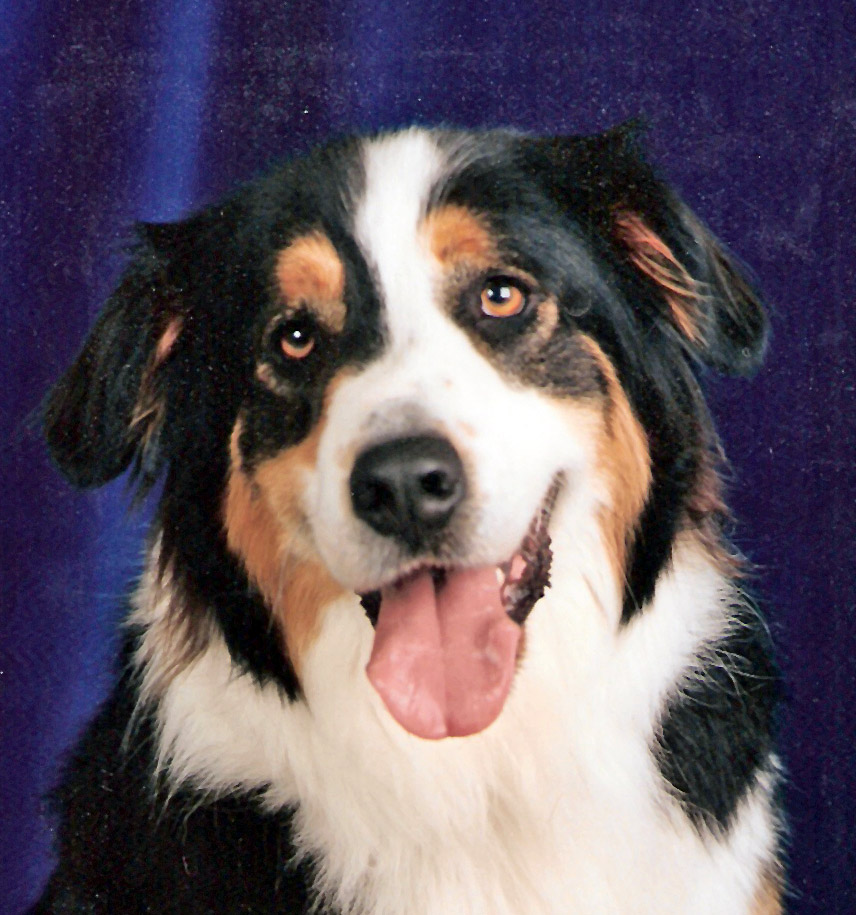 Dover is the reason I breed English Shepherds; he was a dog with heart, intelligence, and incredible patience. He joined our family when our children were ages 6, 4, and 1; when Dover was a year old, we had our 4th child. Needless to say, those were busy years and training the dog was not top of our list of priorities. And yet, he behaved. Sure he liked to run and nip at heels as a pup — and, he had a puppy chewing stage that threatened the siding of our house. Not once in his 14 1/2 years did Dover ever treat a child with anything less than complete tolerance and good humor, however. His patience was remarkable. Over the years, we added 4 female English Shepherds to the pack — and he tolerated the moods and mischief they dished out with unfailing good nature as well.

Dover was one of the most sociable and outgoing English Shepherds you will meet… never met a stranger. He was a definite “foodie”, and his one vice was a willingness to help himself to food left within reach. Given all the hand-outs the kids were giving in those formative years, he can hardly be blamed for feeling entitled!

Dover had normal hips (x-ray at age 2). He was a sturdy, athletic dog, on the large side for an English shepherd. He only worked with livestock on a few occasions, on which he showed level headedness and good instincts. 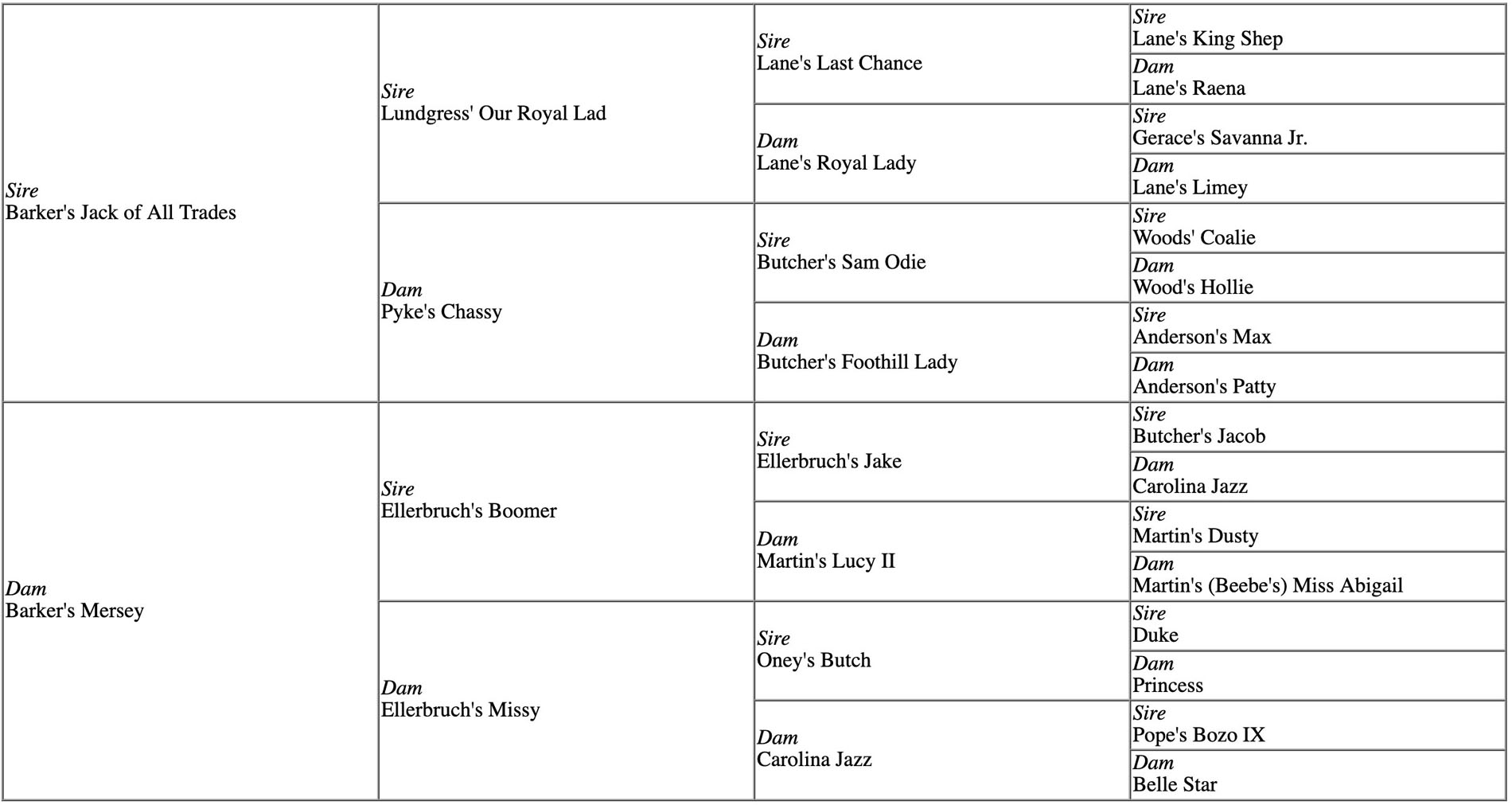 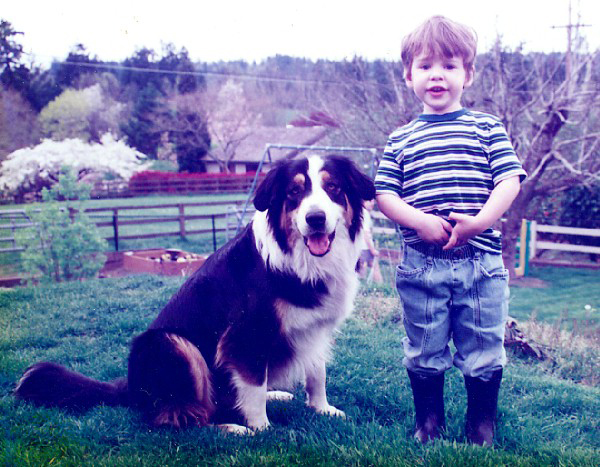 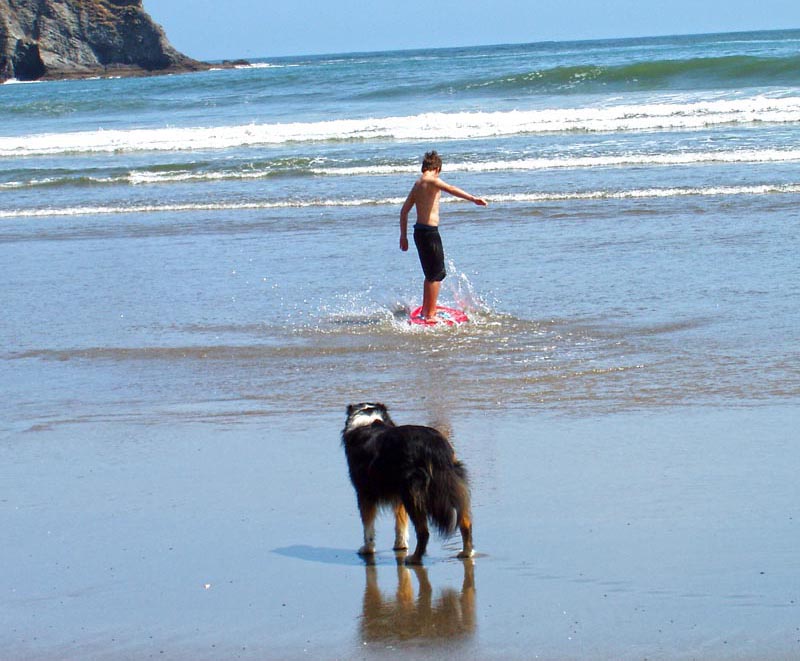 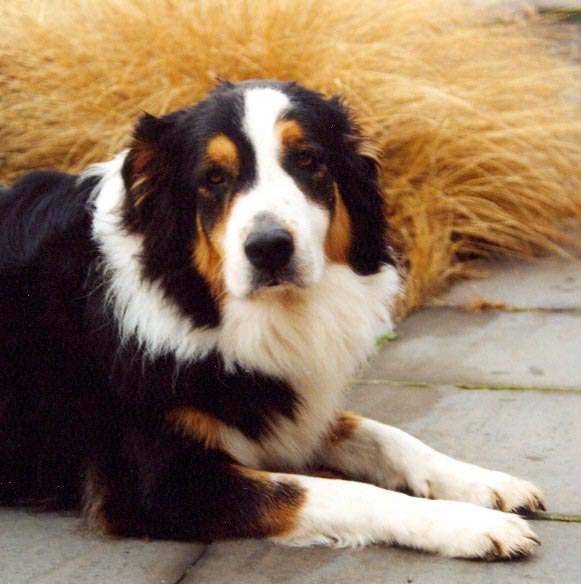 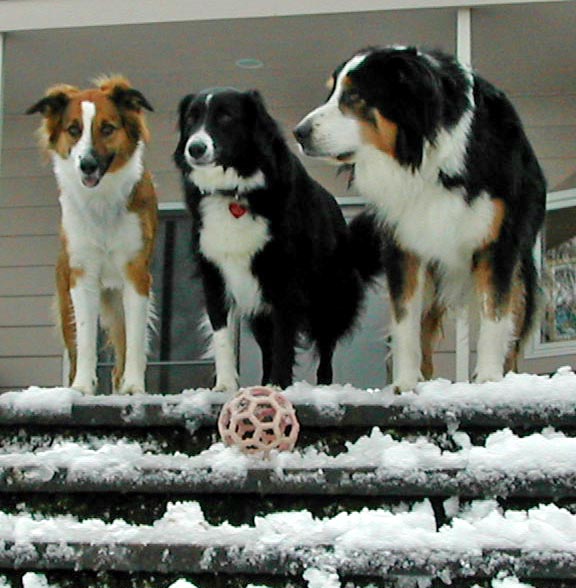 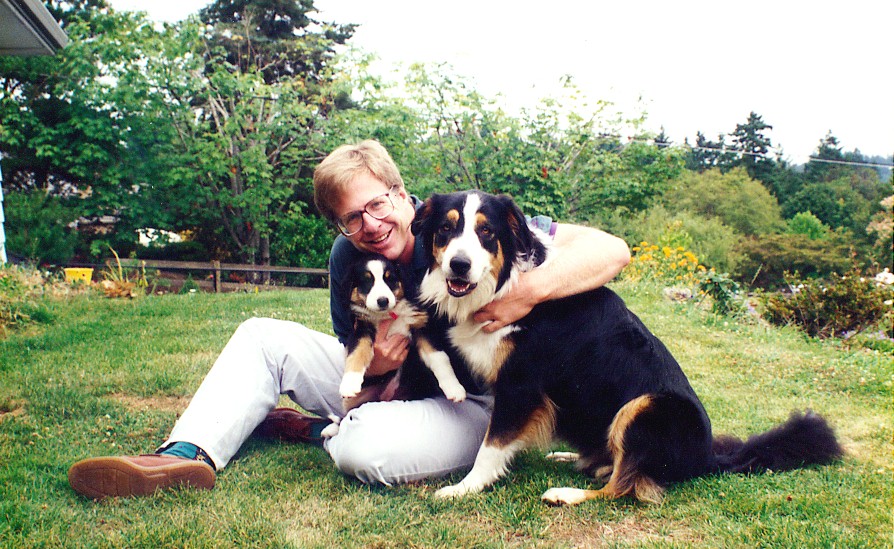 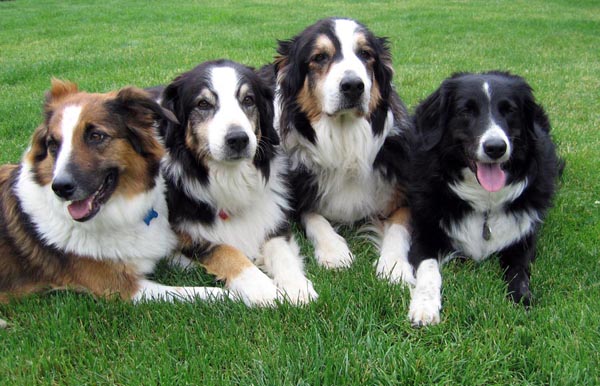 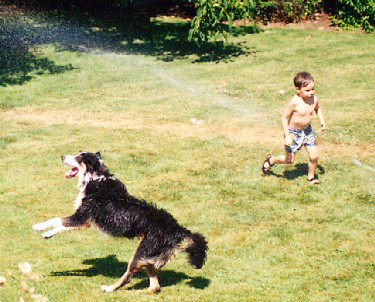 Every English Shepherd should have a job. Dover’s job was helping me raise my kids. My baby girl (now 13) was confirmed on Sunday, our youngest boy has managed to get his grades up enough to make honor roll, and the older two are off to college, so I guess Dover felt I had things well in hand, and it would be okay for him to take a rest. He laid down on Tuesday, we said good bye on Wednesday, and now he’s gone. 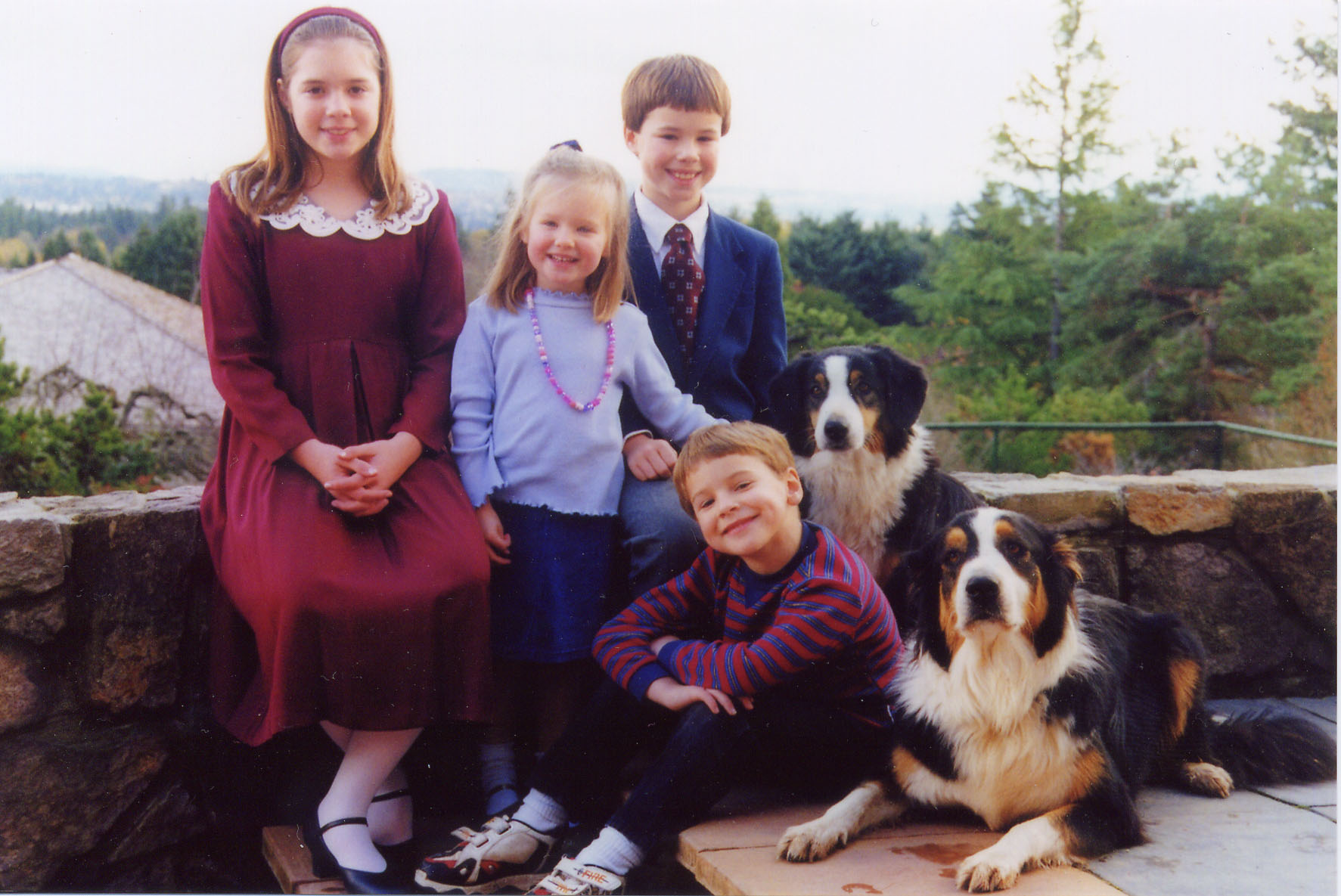 There are a lot of Dover Stories in our family archives… Like the time my husband loaded up Dover and set off on a fishing trip — just the two of them, a man and his dog, heading into the Oregon woods. As it turned out, Dover was not an asset when fly-fishing. Between the splashing and the barking, there probably wasn’t a fish within several miles of their camp site. So, they packed up and headed into a nearby town for a sandwich. Dave tied Dover to a sturdy bench and walked down the block to a deli. Several minutes later, a man poked his head through the doorway and asked if anyone inside owned a black & white dog. Dave looked out — and there was Dover, towing the bench down the middle of the road, on his way to join Dave at the deli. After that, Dave always looked for a drive-thru when on an expedition with Dover.

Or the time I decided to raise my house-keeping standards and bought booties for Dover to wear on our hardwood floors. If laughter is the best medicine, the scene that followed probably added 5 years to my life. Dover looked like an over-sized marionette, each leg moving independently in exaggerated slow-motion steps. Once I’d dried my tears, the booties came off and I resigned myself to scratched floors.

Or the time our oldest daughter and a friend, both about 13 at the time, took Dover for a walk down our little street. The girls were busy gossiping and giggling when Dover suddenly dove into a bush and came up with a large rat in his mouth. The girls’ shrieks echoed throughout the neighborhood — and re-enactments of the incident (Katy yelling at Dover to “drop it”, resulting in Dover opening his mouth mid-shake to send the rat flying towards the girls) kept our boys entertained for weeks.

Dover also inspired art, and poetry… epic verse, such as, “my dog’s name is Dover, he is very fat, he does not like to chase a ball, he likes to chase the cat…” (Anna, age 8).  And, he inspired gratitude. Dover is the reason that “Shepherd’s Way” exists. I’ve read some interesting theories about what Peaslee dogs are selected for over the years. The answer is simple. Dover’s spirit, and now memory, will always be my guide.

12 year old Dover enjoying a game of golf with Sam