As you can see from the pictures, Bob is a beautiful dog. That alone would have won him a home almost anywhere; but what you cannot see is that he is a gentleman.

This is an inborn trait and no amount of training can instill it in a dog; as with people, it is either there, or it isn’t.

When I contacted Jan Hilborn about getting a dog, she questioned me closely about my needs and the situation of the farm. She was reassurred to find that I had already had one English Shepherd, and ultimately found Suzy a splendid home in Colorado with a lady who had been looking for years for a dog of that type. Suzy was not able to herd sheep anymore due to an injury, and was getting depressed at not being able to help anymore. I told Jan that I needed a new dog ASAP, had contacted different breeders, and none were available around here.

I have tried almost all the modern herding dogs over the years; they are either too keen or too hard hearted to work sheep for me. My sheep are mostly pets, and dead tame — I like them that way, but still need to control them and move them about. On my small 38 acre place the English Shepherd is the perfect dog. Suzy was the cow expert, Bob specializes in sheep with a bachelor’s in goat herding. 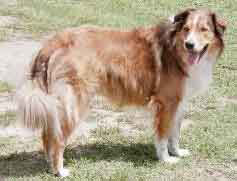 English Shepherds have their own style of herding, a mix of indulgence and brawn when needed. One of my favorite sheep, Freckles the Katahdin made such good friends with Suzy that Suzy flatly refused to herd her — I had to put a collar on the sheep and lead her after the rest of the flock. I was determined that I would not have this ridiculous problem with Bob, and would start him off right.

Sure enough, Freckles explained to Bob that she was not a common sheep and Bob said “yes, ma’am” and stepped around her. I stood boldly up, and said ” you get on her, Bob!” He stopped dead, looking in apparent embarrassment at the rest of the flock watching with rapt attention, and back at me. He reached out and tenderly flea nibbled a fat flank. She didn’t move, standing with her head up and arrogant.

I yelled at him from the distance, to get on with it. He nibbled the thin skin near the udder area — she flinched, but stood firm. Then he had an idea. He continued nibbling on along the side of her belly, until he got to her “armpit”. She began to look worried, and started seriously wiggling without moving her feet. By this time, he had figured out that was her most ticklish spot, and he really went to work .

Pretty soon, she couldn’t stand it any more, shook her head, stamped her foot and galloped off to be with the others. Puppy Bob was very pleased with himself, and now, 2 years later- that’s how he still moves that ewe. She’s getting older, but just as stubborn as ever, and Bob tickles her under her armpit to move her along. No hard feelings, everyone is still friends, but the job got done. That’s how English Shepherds do it, if you give them the time they need.

There is a kindness in these dogs that is so touching, but they can be tough if need be.

Bob will let all manner of fowl run about the yard, but they are not allowed on the kitchen porch. I haven’t quite figured out how he manages this — I have seen him frowning down at an impertinent silkie hen standing on the top step while he was blocking her access to the porch itself. I watched awhile, and she finally left. They go everywhere else they please though.

He knows as soon as anything new hits the ground in the pasture, and will fairly knock you down at the gate to go and see whatever it is. He makes a certain little noise with his mouth he only does when there are babies — and wants to lick them on the top of their head. I figure it’s sorta like a blessing. He can count. I swear it. I had a pen full of Nigerian dwarf babies born, and then sadly, one jumped to a watery death in a water bucket at less that 36 hours old. He looked for her everywhere, and had only laid eyes on her once.

He watches out for predators, even from the SKY. How many dogs do you know that will growl at a BUZZARD??? but– he’s also the dog that shredded the ears and bloodied the nose of a particularly bad ram we had once. I was never afraid to go in the lot, at any time day or night, if Bob was with me the rest of the time we had that ram. It was a bad fight, for sure, but it only happened once, and the ram figured things out. When he was a puppy, he could stop or roll a big market size wether. He doesn’t do that anymore, he doesn’t seem to need to. They know better than to break and run.

He’s also the dog that was here the other day when a big truck with 2 young men in it pulled right into the back yard and started to get out. The truck had no identification — they had not called and said they were coming, I had no idea who they were. They said they wanted to look over the house for estimate on roofing. Bob didn’t think so, he didn’t like them one bit. I trust his opinions. So when the cocky big guy stopped and looked at Bob and asked if the dog would bite I said yes. If I ask him to. There was no doubt this was true, not in anyone’s mind. The rest of the interview was conducted through the truck window. We have had too many break-ins in this area in broad daylight not to at least be cautious. I thought it said a lot for Bob that he didn’t bark but once, but stood unbudging in between me and the truck the entire time.

The earlier ES I had was back when I had the Dexter cows. They were horned, and they occasionally gave her a good kick, and once one swung her head and caught her on the gatepost, and scared me to death — but she was a good little dog. I could take her out to move the bull, and see all of them lying under the sycamore in the lot. Suzy would go and remove the bull, protesting loudly, from the herd and the cows WOULDN’T EVEN STAND UP. They knew the dog wasn’t after them, so they didn’t bother. Then we would take him and put him in another pasture, and he really didn’t want to go — but the Suzy and I had raised him from a calf, and he knew that he might as well. That’s the thing, the dog figures out what you expect, and then the DOG TRAINS THE LIVESTOCK. So it all takes time, but it’s worth a lot to be able to manage matters in a kind and quiet way.

Don’t bother too much with reading books on how to manage MODERN herding dogs– a good old book on raising children would be more useful to you.